Performance time is approximately two hours and 25 minutes, including one intermission.

What makes Turandot so special?

Princess Turandot will marry any suitor who can solve her three riddles — but answer even one wrong and they’ll face the executioner’s blade.

This dark fairytale has been reimagined by director Robert Wilson, “a towering figure in the world of experimental theater” (The New York Times).

With the COC Orchestra & Chorus, and the Canadian Children’s Opera Company

In this production, the names of the three ministers have been changed. Click here for more information.

Princess Turandot knows that marriage can be a dangerous commitment. That’s why all her suitors must answer three riddles – and if they get even one wrong, they face the executioner’s blade. Despite the mortal risk, the exiled prince Calaf is determined to try and win her heart.

A court official reads out a declaration: any prince who wishes to marry Princess Turandot must answer three riddles. One wrong answer, and they’ll be executed.

One of her failed suitors — the Prince of Persia — is to be killed that very night, which stirs the crowd into an excited frenzy. An old man, Timur, is knocked down in the commotion; Liu, a slave who cares for him, cries out in alarm.

The exiled prince Calaf is drawn by Timur and Liu’s distress. He realizes that Timur is in fact his long-lost father, who used to rule this kingdom until he was overthrown in battle. Liu has been caring for Timur ever since then, all because Calaf once smiled at her in court.

Their joyful reunion is interrupted by the court’s proceedings. The crowd eagerly calls for the sharpening of the executioner’s blade and begs for the moon to arrive, which will trigger the night’s killing.

But when the Prince of Persia is brought out, the crowd softens. They realize just how young he is, and how cruel it would be to cut his life short. Turandot arrives and the crowd calls for her mercy. Unmoved, she orders his death.

Calaf is struck by both her beauty and her icy decree; he wants his chance to marry her. Three court ministers (Ping, Pang, and Pong) try to stop him, and so do Liu and Timur. But Calaf’s mind and heart are set: he strikes the court’s gong and calls Turandot’s name.

He will face her challenge.

Ping, Pang, and Pong reminisce about the many executions they have witnessed under Turandot’s orders. The Emperor doesn’t want to see any more bloodshed and tries to convince Calaf to stand down, but is unsuccessful.

It turns out Turandot has good reason to be wary of men: her ancestor was murdered by a prince. That’s why she protects herself with riddles, and that’s why the suitors who answer incorrectly are executed.

She asks Calaf all three riddles and, to everyone’s astonishment, he’s able to answer them correctly.

But there’s another twist. Since Turandot clearly does not want to marry him, Calaf offers her a way out: if she can discover his name by morning, he will offer his life to her. She accepts his challenge, and the tables are turned.

Turandot orders everyone in her realm to seek out Calaf’s name, foregoing sleep and under threat of death.

While the search continues, Ping, Pang, and Pong try to bribe Calaf to leave town, but he is determined to hold up his end of the bargain.

Desperate to discover Calaf’s name, a mob threatens Timur and Liu to reveal it. To protect Timur, Liu proclaims that only she knows the name. She is tortured but refuses to say Calaf’s name. Mystified by this devotion, Turandot asks Liu why she would sacrifice herself for a man. Liu explains that it’s love. She would rather trade her life for his, and she kills herself before she can be forced to reveal his name.

The sun rises, which means Turandot has failed Calaf’s challenge. But while technically she must marry him under their agreement, Calaf does not want her to do so unwillingly. He offers her the chance to kill him instead.

Between Liu’s sacrifice and Calaf’s own offer to die for her, Turandot becomes convinced that marriage and love are worth the risk. She joyfully agrees to marry Calaf and declares that his true name is “Love.” 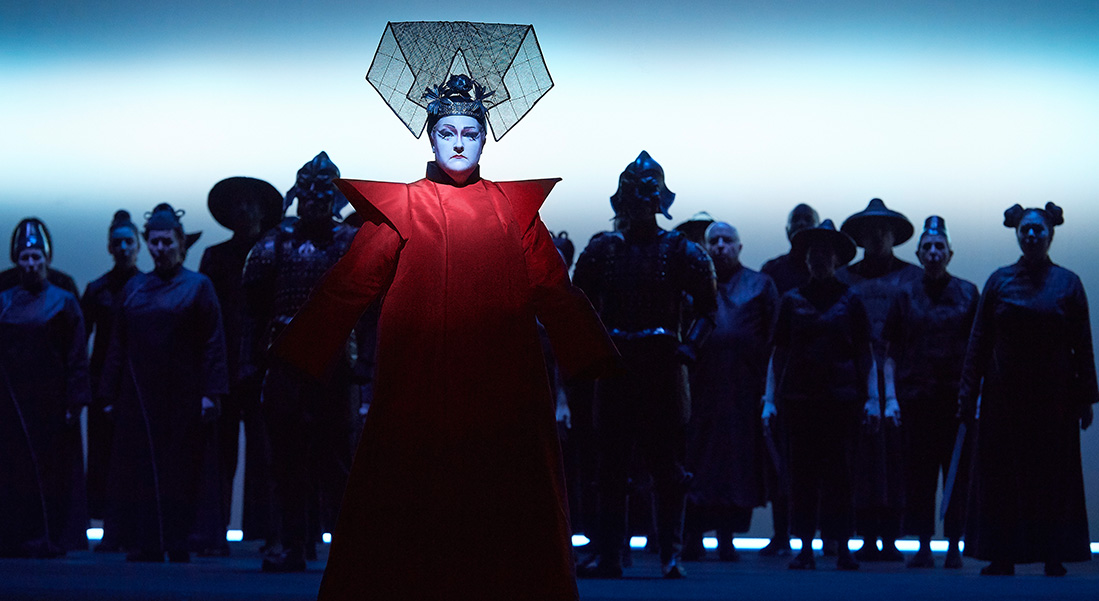 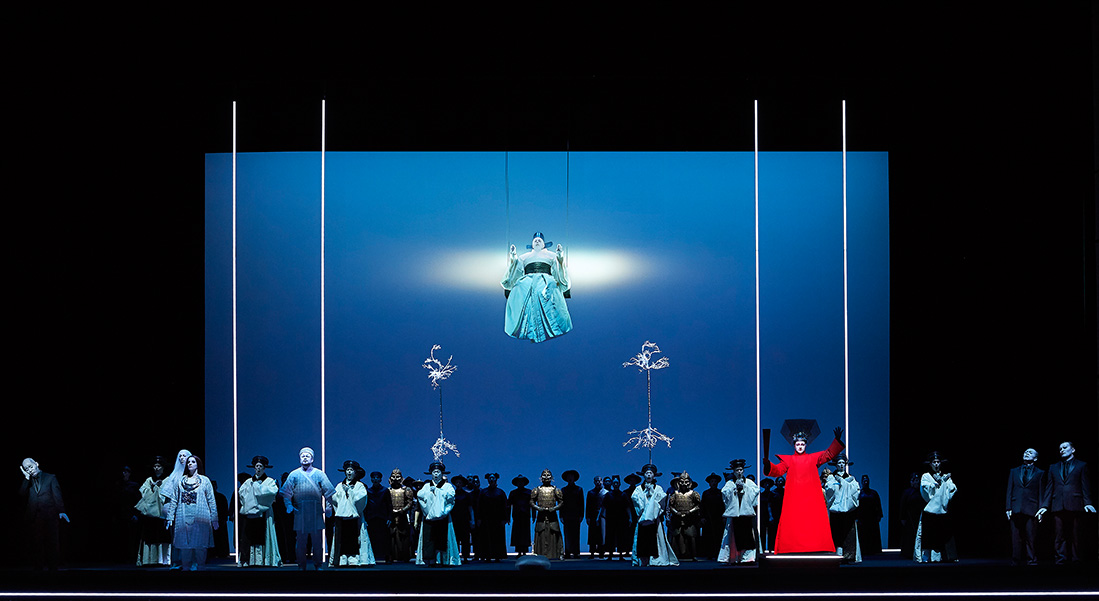 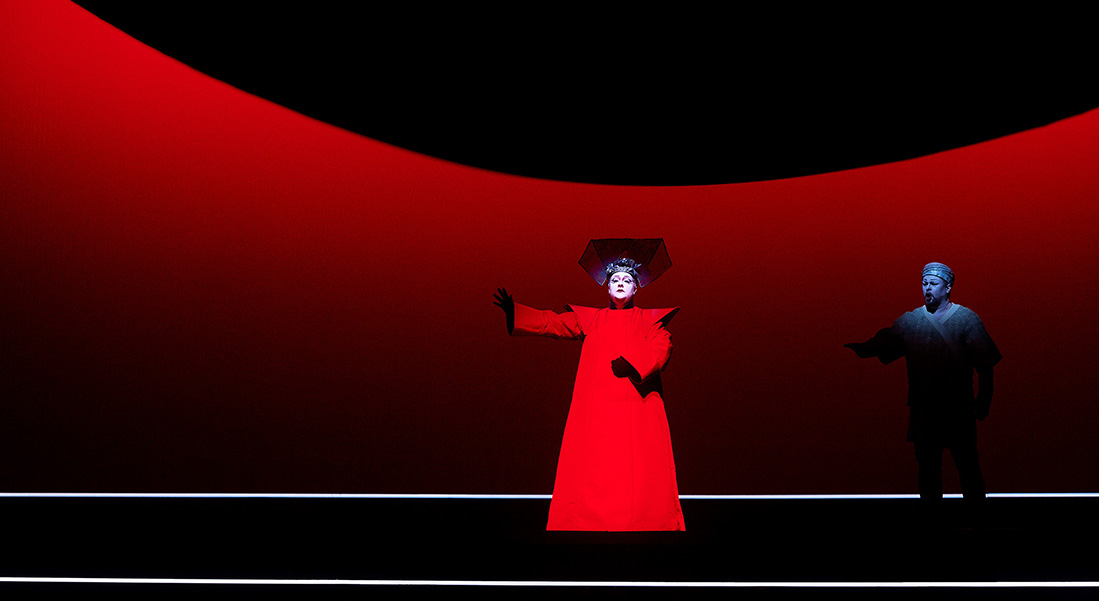 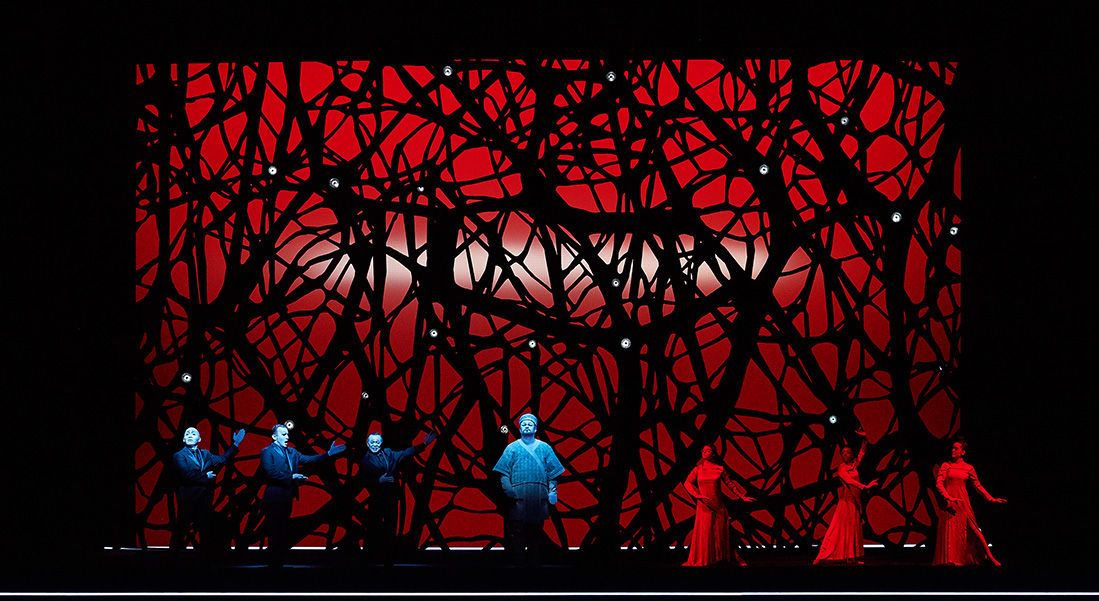 One of opera's biggest blockbusters is reimagined by legendary director and multidisciplinary artist Robert Wilson.

Conductor Carlo Rizzi takes us through “Nessun dorma” (“None shall sleep”), Turandot’s musical calling card. Popularized by Luciano Pavarotti at the 1990 FIFA World Cup, it’s the tune that films, commercials, and reality shows reach for when things get larger than life.

We explore Robert Wilson's striking artistic style with Janice Price (President & CEO of Banff Centre for Arts and Creativity) and Dr. Pia Kleber (Professor of Drama and Comparative Literature at the University of Toronto).

Ahead of her role debut as Princess Turandot in Robert Wilson's new production of Puccini's Turandot, soprano Tamara Wilson reflects on the challenges of singing, working with director Robert Wilson, and Marie Kondo-ing opera.

Sonnet 66 "Tired with all these, for restful death I cry"

Puccini’s Turandot was inspired by Schiller’s early-19th-century German adaptation of an 18th-century Italian comedy by Carlo Gozzi, who drew on a French retelling of a supposedly traditional Persian fairytale set in ancient China. Gozzi created a piece in the style of commedia dell’arte, a codified theatre form with set characters, story lines, and gestures.

Your Guide to Puccini's Turandot

Turandot’s subject matter was a departure for Puccini, who had spent almost the entirety of his career writing operas rooted in realism — La Bohème, for example, is about penniless artists trying to make it in Paris; Tosca is a thriller about an opera singer caught in a game of cat-and-mouse during the French Revolutionary Wars. But with Turandot, Puccini took a decisive turn away from stories about real people in specific places and entered a realm of the fantastical.

How do we watch and listen (and hopefully enjoy) Puccini’s Turandot in 2019? It is a challenge to our sensibilities because the work comes from a vastly different historical moment than our own.

While music might be the first thing you notice in seeing an opera, in this discussion we will unpack the unique power of gesture and movement as a means of storytelling. Featuring Turandot co-director Nicola Panzer and hosted by popular pre-opera chat lecturer Stephan Bonfield, learn how choreography and dance has been used in opera throughout history, evolving from the stylized Baroque period to its important narrative role in Robert Wilson’s masterful production of Turandot, showing this fall on the COC mainstage.

Rooted in Nizami’s 12th century Persian epic poem about a Russian princess, the story of Turandot has inspired adaptations around the world. Carlo Gozzi, Friedrich Schiller, Johann Wolfgang von Goethe and, of course, Giacomo Puccini have all created versions of this captivating tale. Join musicologist Tony Sheppard and gain new insights into the origins and evolutions of Puccini’s Turandot. This event also features a member of the Ensemble Studio performing one of their favourite arias from this captivating opera.

Performance time is approximately two hours and 25 minutes, including one intermission.

What makes Turandot so special?

Princess Turandot will marry any suitor who can solve her three riddles — but answer even one wrong and they’ll face the executioner’s blade.

This dark fairytale has been reimagined by director Robert Wilson, “a towering figure in the world of experimental theater” (The New York Times).