Performance Length: 3 hours and 30 minutes, including one intermission


What makes The Marriage of Figaro so special?

Mozart’s clever comedy is a whirlwind of mistaken identities and delicious twists and turns that unfold over a single crazy day as Figaro and Susanna get ready to tie the knot.

When the lecherous Count Almaviva attempts to seduce Susanna before her wedding, Figaro and Susanna join forces with the spurned Countess to deliver an unforgettable lesson about love.

Mozart wrote his most luminous and profound music for this subversive story of servants who topple their masters and women who prove wiser than the men around them.


“A Marriage of Figaro with psychological depth.”

Household servants, Figaro and Susanna, are getting married. But first, with the help of the Countess, they must deflect the Count’s attempt to seduce Susanna. Intrigue and mayhem ensue as the social structure of the household is turned upside down.

Susanna informs her fiancé Figaro that the Count is making advances to her. Figaro leaves set on revenge. Bartolo and Marcellina enter, the latter baiting Susanna because she wants Figaro for herself, while Bartolo is still smarting at Figaro for making a fool of him in the past. They leave and Cherubino enters, seeking advice from Susanna because, after being caught dallying with the gardener’s niece, he is to be sent away. He hides himself as they hear the Count approaching. The Count, too, is forced to hide as Don Basilio enters. Basilio mentions Cherubino’s crush on the Countess to Susanna and the enraged Count reveals himself. He informs them that he is sending Cherubino away, at which point he finds the hidden page. Furious, he swears to get rid of Cherubino by giving him a military commission. Figaro returns with celebrating townsfolk and asks the Count to unite Susanna with him in marriage. The Count postpones the proceedings.

Susanna tells the Countess that she and Figaro have a plan to teach the Count a lesson: Susanna will set up a rendezvous with the Count, but will send Cherubino in her place, disguised as a girl. The page enters with a song of love for the Countess and a commission letter that the Count forgot to seal. They hear the Count approaching and quickly hide Cherubino in an inner chamber and Susanna elsewhere in the room. The Count is instantly suspicious. The Countess refuses to unlock the inner chamber, claiming Susanna is inside trying on her wedding dress. The Count leaves with the Countess to get a crowbar. Susanna hides herself in the locked inner chamber and Cherubino escapes through the window. Upon their return, the Countess decides to confess everything to her husband and is shocked when Susanna exits the locked room. The Count begs forgiveness for his suspicions. Figaro arrives to gather up the group once more for the wedding. He is followed by Antonio, the gardener, who reports that someone jumping from the Countess’ balcony has crushed his flowers. After prompting from the women, Figaro claims it was he who jumped. Antonio shows him Cherubino’s dropped commission, which Figaro claims he was holding to get the Count’s seal. Marcellina, Bartolo and Basilio enter, and the Count, still suspicious, hears their claim that Figaro is obliged to marry Marcellina to pay off an outstanding debt.

Susanna agrees to meet the Count in the garden. The Count then overhears Susanna tell Figaro that his legal troubles will soon be over. He is furious at the apparent deception. Marcellina and Bartolo, their attorney Don Curzio in tow, confront Figaro, who tells them that being of noble birth—though stolen away by thieves as an infant—he can only marry with the consent of his family. As proof, he reveals his birthmark. Marcellina and Bartolo recognize the mark as belonging to their son, and the three joyfully reunite. Susanna rejoins them, having secured the money from the Countess to pay off Figaro’s debt. At first angry, Susanna is overjoyed at the news. Everyone is happy except the Count, who is sure he’s still being played. The Countess dictates a letter from Susanna to the Count. She plans to surprise her husband in the garden herself. Figaro returns to once more gather everyone for the wedding. During the dancing, Susanna slips the Count her letter.

In the garden, Figaro meets the gardener’s daughter, Barbarina, who the Count has entrusted to return the brooch Susanna pinned to the letter. Figaro assumes Susanna is cheating on him, and invites Bartolo and Don Basilio to join him for her public humiliation. As they leave, the Countess and Susanna appear, each dressed as the other. Cherubino is also in the garden meeting with Barbarina. He spies the Countess and, thinking she is Susanna, leans in to kiss her. Instead he kisses the Count, who swats Figaro. The Count declares his love for Susanna, who is really the Countess, while Figaro tells the Countess, who is really Susanna, about the tryst. Susanna forgets to disguise her voice, and Figaro figures out it is she under the Countess’s cloak. Their embrace is noticed by the Count, who is about to expose them when his wife takes off her own disguise. Almaviva is shamed and apologizes to his wife for both his jealousy and his infidelity. They all return to the celebration. 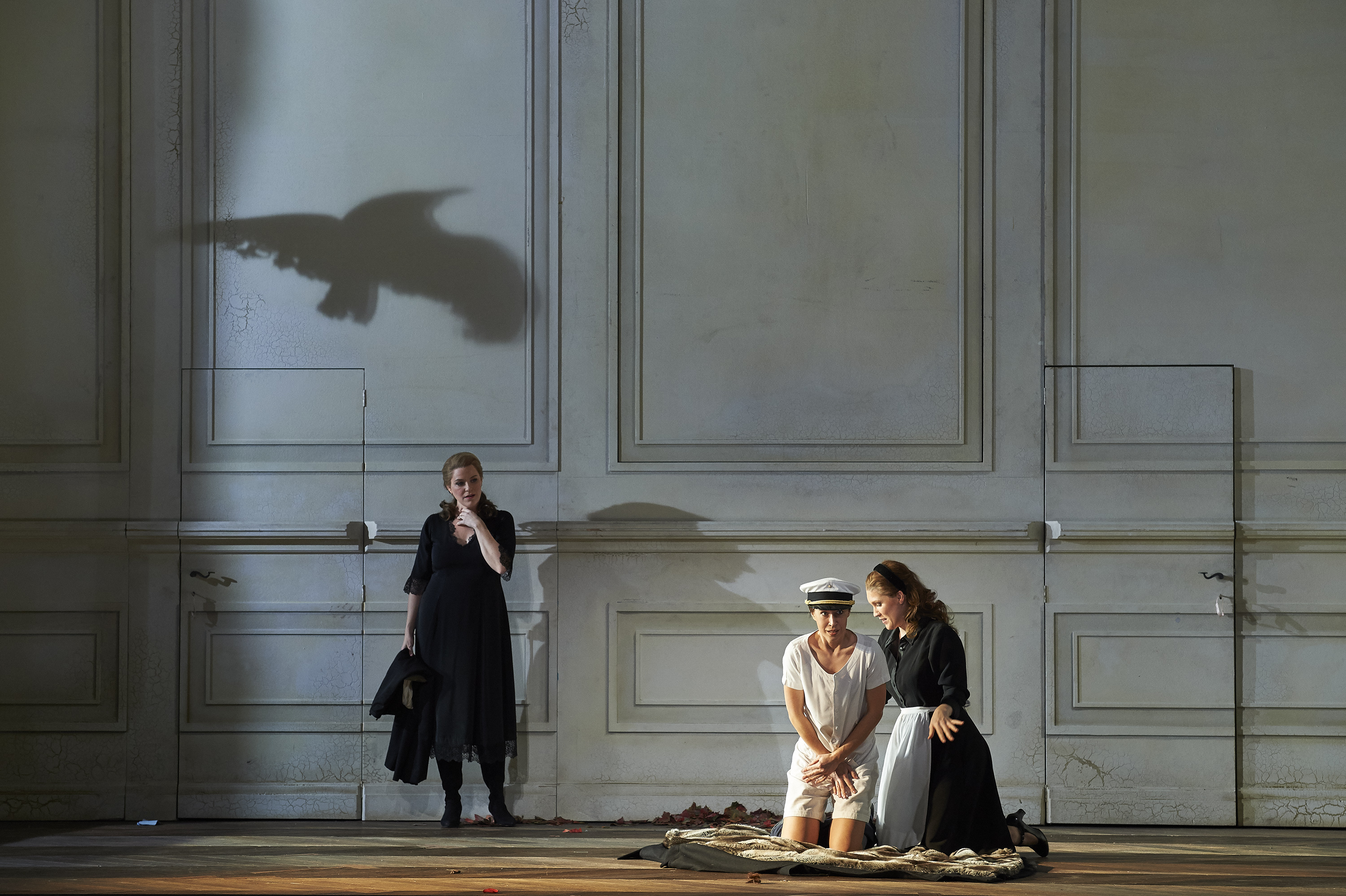 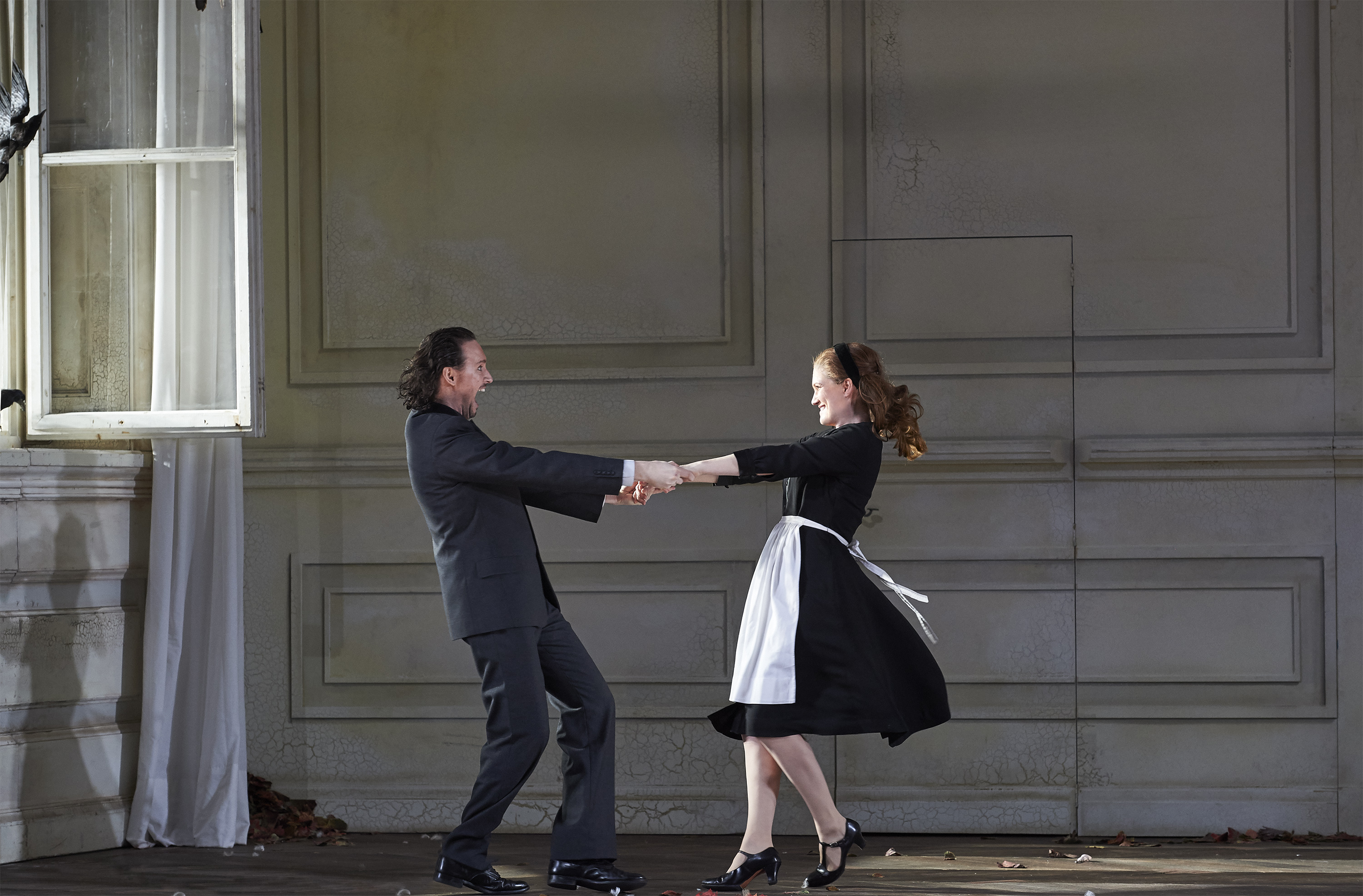 Erin Wall as the Countess, Emily Fons as Cherubino and Jane Archibald as Susanna in The Marriage of Figaro, (COC, 2016), photo: Michael Cooper

Josef Wagner as Figaro and Jane Archibald as Susanna in The Marriage of Figaro, (COC, 2016), photo: Michael Cooper

A scene from The Marriage of Figaro, (COC, 2016), photo: Michael Cooper

As one of the world’s most famous composers, Mozart needs little introduction, though the enormous mythology of his creative genius runs the risk of eclipsing the reality of his life and work.

Born in Salzburg, Austria, Mozart taught himself the piano and violin by age five. Soon his father Leopold, a musician himself, was taking the precocious Mozart to the royal courts of Europe to entertain the aristocracy with his musicianship and flair – playing piano with a blindfold on, for example, or recalling a piece of music with perfect accuracy after only a single hearing.

In his teenage years, Mozart continued to travel throughout Europe in search of a permanent job in a major cultural centre. He yearned to compose for the stage, but he couldn’t find a stable position. Eventually he left Salzburg for good and settled in Vienna, causing a rift with his father in the process that would never completely heal.

The time Mozart spent in Vienna – where he kept a breakneck pace of composing, soliciting commissions, giving lessons, performing concerts – was his most sustained and accomplished period from an artistic, popular, and financial perspective. It’s where he met one of his most important collaborators, Lorenzo Da Ponte, with whom he created The Marriage of Figaro (Le nozze di Figaro),  Don Giovanni and Così fan tutte.

Though pop culture often perpetuates the myth of Mozart as a kind of natural genius, an immature man-child who is nonetheless capable of creating masterpieces without expending much effort, in actuality he displayed incredible work ethic and dedication to his craft. When he died at the young age of 35, he had already composed 41 symphonies, 27 piano concertos, huge amounts of chamber music, as well as 22 operas.

Lorenzo Da Ponte was born into a Jewish family in Italy that converted to Catholicism when he was a teenager. Educated by the Church and given a strong grounding in languages, literature and poetry, he became a priest but lived more of a playboy’s lifestyle than that of the cloth.. Spending his 20s in Venice, he carried on numerous love affairs and intrigues, and eventually got himself so scandalously entangled with a married woman that he was banished from Venice on charges of mala vita or “bad living.”

He found his way to Vienna in 1781, where he got himself appointed as the principal poet of the Italian opera company at the Burgtheater. (Though he had no experience writing librettos, Da Ponte had developed his raw poetic skills in Venice as one of the city’s improvisatori, lyricists who amused rich patrons by improvising rhyming verse to a musical accompaniment – basically an early version of freestyle rapping). Two years later he met Mozart in one of Vienna’s salons, and the two began an artistic collaboration that would mark a high point in their respective careers, collaborating on The Marriage of Figaro, Don Giovanni and Così fan tutte.

Da Ponte was banished from Vienna by the 1790s (the political situation changed and he fell out of favour with the new ruler). He moved to London where he worked some years as a librettist for the King’s Theatre, was fired, took up several unsuccessful business ventures, went into debt, and, to avoid the consequences, immigrated to America. He lived out most of his life in New York, continuing his eclectic career by running a grocery store, becoming the first professor of Italian literature at the newly founded Columbia University, running a boarding school and a bookstore, and spearheading the construction of the first purpose-built opera house in the United States (the “Italian Opera House,” no longer in existence). He became a U.S. citizen at the age of 79. Upon his death 10 years later, an enormous funeral was held for him at Manhattan’s St. Patrick’s Cathedral.

Performance Length: 3 hours and 30 minutes, including one intermission


What makes The Marriage of Figaro so special?

Mozart’s clever comedy is a whirlwind of mistaken identities and delicious twists and turns that unfold over a single crazy day as Figaro and Susanna get ready to tie the knot.

When the lecherous Count Almaviva attempts to seduce Susanna before her wedding, Figaro and Susanna join forces with the spurned Countess to deliver an unforgettable lesson about love.

Mozart wrote his most luminous and profound music for this subversive story of servants who topple their masters and women who prove wiser than the men around them.


“A Marriage of Figaro with psychological depth.”