What makes La Traviata so special?

Violetta is the most captivating courtesan in all of Paris — but when she falls in love with a handsome young gentleman, Alfredo Germont, she dares to embrace a different kind of life and love.

One of Verdi’s most celebrated and popular operas, La Traviata features show-stopping arias and riveting drama, making Violetta one of the pinnacles of the soprano repertoire. This season, Sondra Radvanovsky and Vanessa Vasquez bring their vocal talents to this formidable role.


“The very best that the world of opera can offer.”

Co-production with Houston Grand Opera and Lyric Opera of Chicago

Alfredo woos the lovely courtesan Violetta into giving up her madcap Paris life to live with him in rustic bliss; however, his father persuades her to give up Alfredo in order to save his family’s honour, but she is ordered not to tell him.  Back in Paris, Violetta suffers Alfredo’s anger and a fatal attack of tuberculosis. She is reunited with him at last, but it is too late…

While entertaining members of the demi-monde of French society in her Parisian home, the beautiful but frail courtesan Violetta Valéry is introduced to Alfredo Germont, a young man from Provence. Alfredo tells her that he has adored her since he first set eyes on her, and proclaims that no one could ever love her as much as he now does. Violetta gently rebuffs him but invites him to call on her the next day. Later, when alone, she wonders if she’ll ever find true love, then laughs off the idea, declaring that her life will remain a whirl of pleasure.

Violetta has renounced her life as a Parisian courtesan and is now living happily in the country with Alfredo. Alfredo is surprised to learn that Violetta has been secretly selling off her possessions in Paris to pay for their living expenses, and, disturbed by this, he departs for Paris to raise enough money to buy back Violetta’s belongings. After he has left, Alfredo’s father, Giorgio Germont, visits  Violetta. He tells her that hisdaughter is currently engaged to a young man from a respectable family and explains that Alfredo’s affair with a courtesan will threaten his daughter’s marriage. He begs Violetta to leave Alfredo forever. At his insistence, Violetta agrees to break up with Alfredo and writes him a letter. Alfredo returns unexpectedly and Violetta quickly leaves, promising to return later.

A messenger then delivers the letter to Alfredo, in which she tells him that she has left him forever to return to her former life in Paris. Germont returns, asking Alfredo to return to their family home but Alfredo, hurt and angered by Violetta’s rejection, sets off to find her in Paris.

A party is in progress at the home of Violetta’s friend, Flora. Alfredo enters and proceeds to gamble. Violetta has returned to Baron Douphol, her rich lover. Fearing their confrontation could lead to a duel, Violetta begs Alfredo to leave. He is overcome with rage and, in front of all the guests, he insults Violetta who faints. Germont, in search of his son, arrives to witness the whole scene.

Violetta lies dying of consumption. She comforts herself by re-reading a letter from Germont, in which he explains that he has told his son the true reason for Violetta suddenly leaving him.  Violetta’s maid Annina informs her that Alfredo has arrived and he rushes in, begging her to leave Paris with him forever. Violetta eagerly agrees but collapses. The doctor is summoned and he arrives with Alfredo’s deeply remorseful father. After saying her final farewell to Alfredo, Violetta dies in his arms. 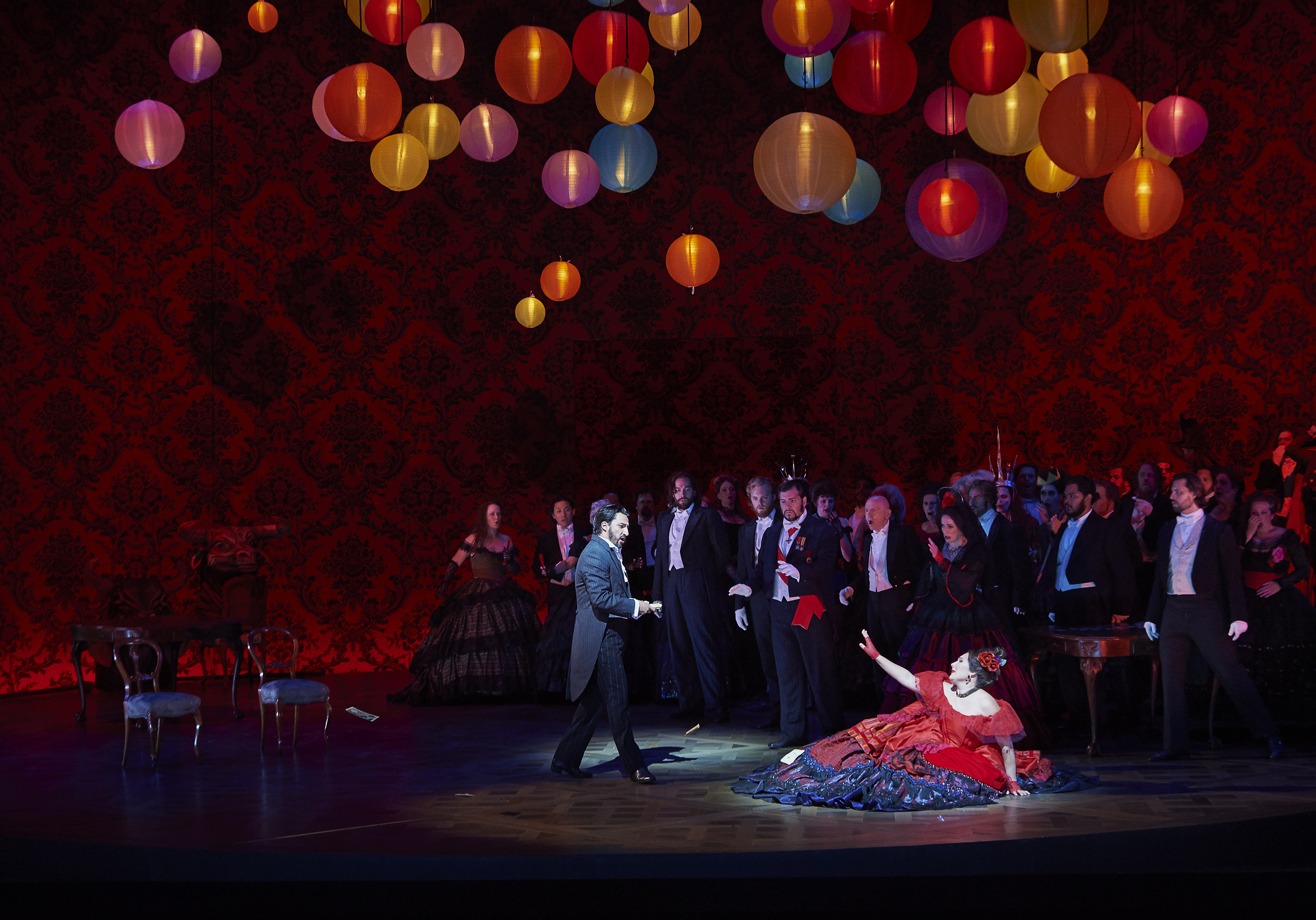 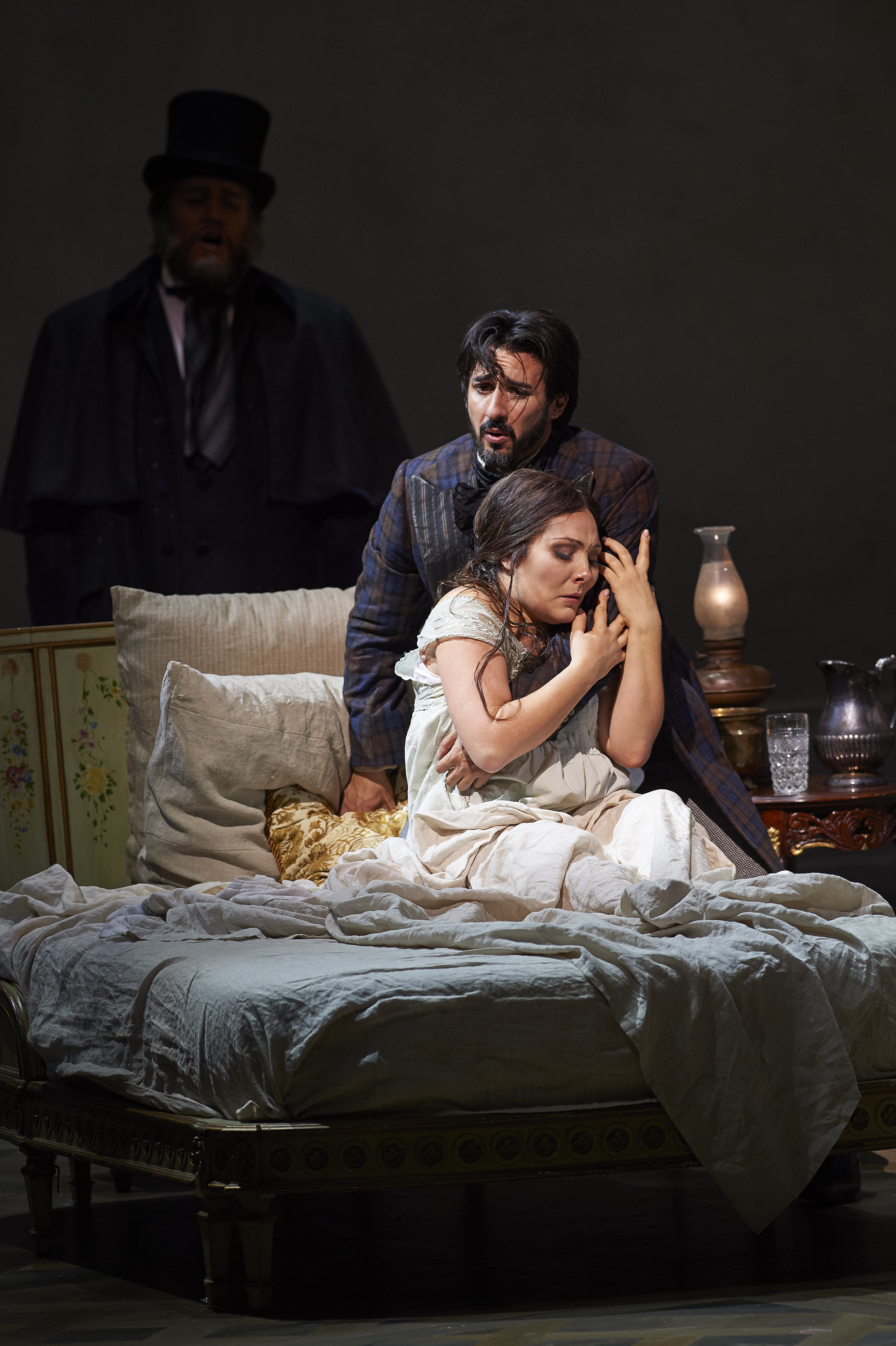 Born in the small village of Roncole, in the Duchy of Parma, Giuseppe Verdi was a gifted musician from the start. His first opera, Oberto, conte di San Bonifacio, premiered at La Scala, Milan in 1839. Personal tragedy in the loss of both his young children and his wife, gave way in time to a prodigious output of composing from Nabucco (1842) to his great middle-career trilogy of Rigoletto (1851), La Traviata, and Il Trovatore (both in 1853). By the 1850s, he had achieved fame and success as the foremost Italian opera composer in the world. He had also fallen in love with soprano Giuseppina Strepponi, who would become his wife. After the premiere of Traviata, Verdi’s operatic output slowed (by his own impressive standards).

The following 18 years produced six new works. That same year Verdi’s name was adopted as a slogan for Italian nationals of the Risorgimento*: “Viva VERDI” stood for “Viva Vittorio Emanuele Re D'Italia.” As a powerful and beloved symbol of this movement, Verdi was persuaded in 1861 to become a member of the newly-formed Italian parliament. This intense period of composition and political turmoil ended with the premiere of one of his most famous operas, Aida, in 1871.

The remaining years of Verdi’s life were spent building his financial strength, working on non-operatic works such as his Requiem (1874), and reworking his previous operas. Verdi completed just two operas in his last 30 years, Otello (1887) and Falstaff (1893), but they are both masterpieces. Verdi died in 1900 and was buried beside his wife – who had predeceased him by three years – at Casa di Riposo, a home for retired musicians in Milan, which he had funded.

Verdi lived through a century in which Italian opera was enjoying a golden age, with composers such as Donizetti, Bellini and Rossini hard at work. But it was Verdi who redefined the art form, evolving from writing operas with sung-spoken text (recitative) punctuated by moments of show-stopping pieces, to focusing on more through-composed works, emphasizing seamless musical transitions between scenes to propel the drama forward. It was the story, emotions and relationships between characters which motivated Verdi’s compositions more than the possibilities of mere spectacle (although he could do that brilliantly too).

This was a 19th-century political and social movement that sought to unify the individual states of the Italian peninsula into a single Kingdom of Italy, which, after decades of struggle, occurred in 1861.

Born in Murano, Italy, librettist Francesco Maria Piave first studied in Rome to become a priest, before moving on to philosophy and finally journalism. In 1842, he became resident poet and performance director at Teatro La Fenice in Venice, where he remained until 1860.

Although the two worked closely together and had formed a tight friendship, Verdi was not blind to the weaknesses of Piave’s writing and sometimes called in other writers to refine the work. Piave was nonetheless admired for his theatrical sense and his ability to create stirring, catchy lyrics in arias (solos). In addition to working with Verdi, Piave also wrote almost 30 librettos for other composers including Mercadante and Pacini.


What makes La Traviata so special?

Violetta is the most captivating courtesan in all of Paris — but when she falls in love with a handsome young gentleman, Alfredo Germont, she dares to embrace a different kind of life and love.

One of Verdi’s most celebrated and popular operas, La Traviata features show-stopping arias and riveting drama, making Violetta one of the pinnacles of the soprano repertoire. This season, Sondra Radvanovsky and Vanessa Vasquez bring their vocal talents to this formidable role.


“The very best that the world of opera can offer.”